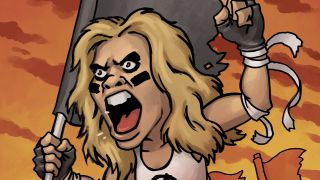 IT WAS WRITTEN UNDER PRESSURE

“When Angela [Gossow, ex-vocalist] joined the band for [2001 album] Wages Of Sin, it made a big impact and a huge difference to what we were doing. We had a heavy touring schedule for the first time in our career, so it was a shock when management told us that we needed to start thinking about making a new album. We were like, ‘OK… we don’t have any songs!’ Up to that point we’d just do a handful of gigs here and there or we’d go to Japan for a few days, so we always had time at home to write killer music. For [2003’s] Anthems Of Rebellion, we wrote in breaks between tours – that’s where We Will Rise came in.”

THE SONG WAS A TEAM EFFORT

“When you go out on tour and play a lot of shows, you start noticing what goes down well and what doesn’t, and so we wanted an anthem that would be a good track for the set. Chris [Amott, Michael’s brother and former Arch Enemy guitarist] brought in the basic riff, the main theme for the song, and a couple of the other riffs as well. I added a few bits and pieces and we all arranged it together. It felt pretty sparse and very straightforward, but we were very interested in doing something like that because we had a lot of very busy tracks. The busier songs were not going down as well as the more mid-tempo anthemic songs, so We Will Rise was perfect.”

IT WAS A NEW KIND OF ARCH ENEMY SONG

“We had much more confidence after touring so much, and particularly with Angela in the band. We were excited to do something new and We Will Rise was just that. There was a bit more air in the song. It has a lot more dynamics than we’d had previously. We’d always been totally full-on before! We’d always hide behind the full-on attack, playing a lot, all the time. You’re more vulnerable when you just stop and let the song breathe. For half of the verse in We Will Rise, I’m not actually playing anything!”

THE LYRICS HAVE A UNIVERSAL APPEAL

“I wrote the lyrics for We Will Rise. They are pretty anthemic, aren’t they? To be honest, my lyrics are always the same. I’ve been writing the same song for 25 years, ha ha ha! It’s just variations on how I feel about things. I just nailed it on that one, a bit better than on some others. It’s one of those songs, it brings everyone in the room together. The song is about being an outsider so it resonates and I think it applies to metalheads or any kind of subculture, I guess. We’re stuck with it now!”

WE COULDN’T REPEAT THE FORMULA

“We’ve never written another We Will Rise. As the main songwriter of the band, I’m afraid I have a weakness, in that I can’t write to the same formula every time because I don’t have a formula! Of course, Chris was co-writer on We Will Rise, but speaking for myself, I start thinking, ‘Ooh, this is a huge track for us, so we need more of those!’ but I just can’t do it. It’s a one-off. We’re music nerds and we don’t want to repeat the same ideas.”

“When we wrote it, our management and the label were buzzing about it, but I think we regarded it as just another song from the album. At it turns out, I don’t think we’ve played a show without playing it since we made Anthems, and I don’t think we ever will. We’ve played it all over the world. Sometimes we’ll play it somewhere like China and it feels really powerful, because some countries don’t have the same kind of freedoms that we have. From the stage, I can see people mouthing the lyrics and it obviously means a great deal to people.”

The new Arch Enemy album Will To Power is out now via Century Media.