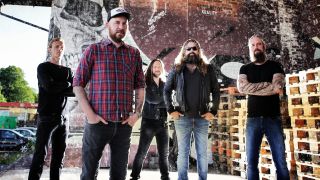 Despite the occasional report to the contrary, the ’90s were an awesome climate for great music. Pantera, Machine Head, Sepultura, Korn, Emperor, Marilyn Manson, Cannibal Corpse… the list of names to have created genre-defining efforts in that period is as impressive as in any other era you’d care to name.

“Gothenburg? It’s just a small city!” laughs In Flames’ frontman Anders Fridén while recalling the formulative years of one of the most important metal bands to ever do it. “There weren’t that many people that were part of the metal scene. It was maybe 40 guys… everybody would jump into each other’s bands and help out. I mean, we had no idea, we were just a bunch of dudes who loved metal!”

The small city he’s referring to is, of course, the base for one of the most important and influential metal scenes in history. Gothenburg, Sweden’s modest settings mark the centrepiece of melodic death metal – a genre which added a dash of NWOBHM gung ho and catchy, chorus-centred song structures to death metal’s pummelling brutality to bridge the divide between ‘mainstream’ metal and its more extreme cousin like never before. While At The Gates were seen as the purists’ choice and Dark Tranquillity a more grandiose option, it was In Flames that closed this gap most successfully and, as debut album Lunar Strain turns 20 this year, their impact is still being felt keenly, two decades on.

“It was exciting!” recalls Anders of that pivotal couple of years in metal’s history. “At The Gates got a deal with Peaceville and Entombed got a deal with Earache, so it made us realise that [Swedish bands] could actually get out of Sweden. A lot of labels were interested in us and were flying us out and treating us well, and when we signed with Nuclear Blast, we didn’t feel that we’d ‘made it’ or anything, but it was, ‘Wow, here’s this big opportunity to play to more people and get more tours outside of Sweden.’ When the media started referring to the ‘Gothenburg sound’ we had no idea that it would go across the Atlantic and would go this far.”

The record deal enabled the band to embark on a true golden age that yielded four colossal albums in as many years: 1996’s game-changing The Jester Race, the catchier Whoracle in ’97, the more versatile Colony in ’99 and, in 2000, the pop-metal masterpiece that is Clayman. While their peers either ground to a halt or struggled to successfully evolve their sound beyond the staple melo-death template, In Flames were still shitting out brilliant songs for fun and forever staying one step ahead of the game – a trick which Anders notes was essential to their survival.

“We never wanted to repeat ourselves,” states the singer. “When you’ve done something and, I don’t want to say ‘perfected it’, but done it well, you don’t then want to do the same melody a thousand times. You want to move further and you want to take your sound as far as possible. Back then, we just tried to make use of the influences we were listening to – death metal, NWOBHM and the German thrash stuff. We put all that into a blender, and out came In Flames, but we can’t just do Jester Race again and again.”

As In Flames’ penchant for evolution continued and their status grew across Europe, there were evidently ears pricking up further abroad. Ears that belonged to the very kids that would grow up to lead metal’s big and bold mid-00s resurgence, no less. Kickstarted by the arrival of Killswitch Engage’s masterful Alive Or Just Breathing in 2002, a flurry of US metalcore bands rose up to become the face of metal’s most exciting rejuvenation in a decade, with the likes of KsE, Trivium and As I Lay Dying playing to huge crowds around the globe while releasing some of the finest albums of their time – albums peppered with riffs that shamelessly exposed their Swedish backbones. Meanwhile, despite putting in the legwork – and ploughing continued success on Europe’s mainland – In Flames were left looking up and scratching their heads.

“It was like, ‘Wait for us!’ Ha ha ha!” laughs Anders of the experience of seeing the very bands they’d influenced conquer the planet. “When we played in America and we played with those bands, their fans were like, ‘Who are you?’ We were like, ‘What? You’ve never heard of us?!’ I dunno why… it’s all about timing and luck and where you are. Exposure, record companies, European versus American… I don’t know!”

Fascinatingly, and despite their lack of media props at the time, In Flames’ influence by no means finishes there. Through the early to mid-00s the Swedes continued to release great material, from Reroute To Remain’s electronica-dabbling delights in 2002 (and look how many young bands are trying to pull off that shit more than a decade later) to what was arguably their last classic record in 2006’s monstrous, metalcore-friendly Come Clarity. Indeed, metalcore has, if you haven’t noticed, been experiencing a boom in great, young bands once again as of late, and while many of them will point to the Killswitches and Bullets of this world as a chief influence, there’s another name lying beneath the surface that has proved equally inspirational.

“I first heard In Flames when I was 16,” remembers Bury Tomorrow bassist Davyd Winter-Bates. “A friend gave me Reroute To Remain, and I remember listening to it and honestly feeling like my life was changing. I’d go as far to say that Come Clarity is on par with [KsE’s] The End Of Heartache for ‘The World’s Greatest Metalcore Album award.”

“In Flames were one of the first bands I heard when I was young and first delving into metal,” recalls While She Sleeps axeman Mat Welsh, whose band support In Flames across Europe later this month. “I remember seeing them with Slipknot in the UK back in 2002, and I’ve been a fan ever since. It’s just those anthemic riffs, man. Riffs that you can sing along to.”

So then, that’s at least two generations of mainstream-busting bands that have been directly influenced by a band from a “small” city in the South of Sweden. Is Anders aware of how many bands have been nicking their riffs over the years?

“You know what? I don’t listen for that,” comes the flat response to our question. “I don’t listen to a new band thinking, ‘Hmmm, can I hear something of my own in this?’ I listen with fresh ears. If we can bring out a [young] band and expose them to our audience, it gives something back, and they have fans that will have never heard of us, so maybe we can ‘borrow’ some of theirs as well. Ha ha ha!”

Doubtless that will be exactly what happens when In Flames hit the road once again this autumn in support of new album Siren Charms – yet another fearless step for a band that refuse to stand still and another record that, we can only presume, will be influencing more bands for years to come. While they may not be headlining arenas on these shores or Stateside, theirs is still an indelible mark left on the ever-changing face of metal, and as far as they’re concerned, given all the circumstances, they’ve done pretty damn well as it is.

“We’ve done good, so there’s nothing I feel that we could have done differently,” surmises Anders. “I’ve been touring my ass off and creating music that I like, so if it all ended today, I would be like, ‘OK, I did something!’ What is really cool is that we were a bunch of guys in a small city in Sweden and, apparently, we influenced a lot of people around the world without even knowing about it. That was a pretty cool thing to be part of.”

Siren Charms is out now via Sony

“I can honestly say that I wouldn’t even be here talking to you now if I hadn’t heard In Flames. I heard them before I heard Iron Maiden and, as far as I’m concerned, they are that important. They’re a huge influence on my playing; I’d never heard this mixture of death metal, melodic NWOBHM and Swedish folk music before. If I had to pick my favourite album… well, I could be here all day! Reroute To Remain means a lot to me as it showed you could be very melodic and heavy but, if I’m being pushed, The Jester Race just pips it. They are such an important band.”