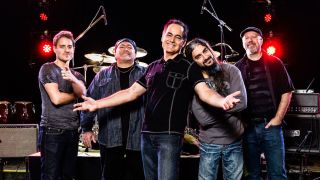 The Neal Morse Band will return for 2017’s edition of Cruise To The Edge, while Patrick Moraz will make his debut appearance.

They’re the first artists – alongside Argentinian outfit Bad Dreams – to be named for Yes’s five-day festival aboard the Royal Caribbean Brilliance Of The Seas, which sets sail from Tampa, Florida, on February 7 next year.

Organisers say: “We’re pleased to announce Neal Morse’s return. The band blew us all away with their amazing set last cruise in November.”

The 2015 edition also featured Yes, Marillion, Alan Holdsworth, Anathema, Spock’s Beard and others. Many more acts for the next event will be announced in due course, while tickets go on sale soon via the festival website.

Stormwatch! Prog goes on Cruise To The Edge.