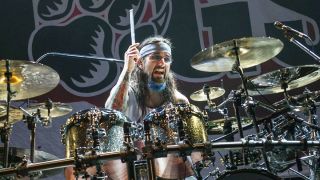 Mike Portnoy will celebrate his 50th birthday with a rock cruise featuring live performances from throughout his career.

He says: “April 20, 2017, is my 50th birthday. If I could have any wish, any birthday gift to celebrate half a century on Earth, it would be to gather all of my family, friends, bandmates and fans on a ship sailing across the ocean and celebrate my 50 years of life and 30 years of making music with all my loved ones.

“This will be the concert of my lifetime.”

Cruise To The Edge sets sail from Tampa, Florida, on February 7 and runs until February 11.

Portnoy recently said he has never considered himself to be a great drummer.