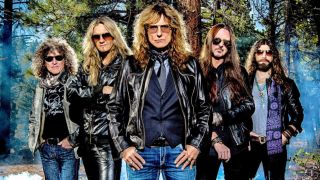 Whitesnake have announced that they’ll release a new book titled The Purple Tour in December.

The band launched The Purple Album in 2015, featuring reimagined takes on material from frontman David Coverdale’s time in Deep Purple.

The album was followed by an extensive tour, which will be documented in the new book featuring behind-the-scenes photos, notes from the band and a song-by-song breakdown of the tour’s setlist.

The Purple Book will be available in two versions, including a fully signed and numbered Signature Edition which will ship in time for Christmas.

In addition, Whitesnake will release The Purple Tour Live on November 24 on CD/DVD, Blu-ray, 2LP, CD and on digital formats.

Coverdale says: “Each member of the band brought their incredible individual talents and a real band identity to this music. We’ve all done the best we can with this project with respect to the music, and the legacy of Deep Purple Mk3 and Mk4.”

Pre-orders for the book and live package are now open.