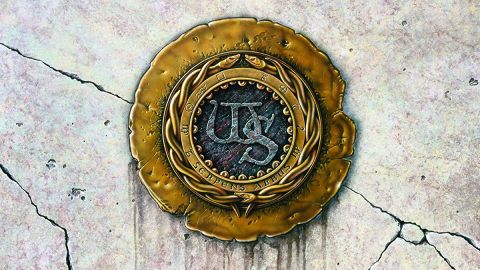 Alongside Def Leppard’s Hysteria, Bon Jovi’s Slippery When Wet and Guns N’ Roses Appetite For Destruction, Whitesnake’s 1987 stands as the high-water mark of the MTV rock era, a blow-dried masterpiece wherein the blues moved to LA, got itself a spray tan and a perm and proceeded to hump the entire western hemisphere and a fair chunk of the eastern one into submission.

It was an unlikely success story. Half a decade earlier, Whitesnake had been a strictly niche concern in global terms – an old-school British blues rock band (albeit a glorious one) put together by the singer with the glasses and frizzy hair from Deep Purple who wasn’t Ian Gillan. They were a decent seller at home, but when this bunch of lumpy English dudes in denim flares and satin jackets knocked on America’s door, America hid behind the curtains and pretended it wasn’t home.

Most people would have taken the hint eventually. Except you can never underestimate the stubbornness of David Coverdale. The singer’s roving eye had been caught by a swaggering young guitar hotshot named John Sykes, then shooting off six-string pyrotechnics with the final incarnation of Thin Lizzy. Coverdale enticed Sykes into the latest line-up of Whitesnake in 1983, adding his firepower to a turbocharged remix of the band’s sixth album, Slide It In, designed specifically for the US market – something that even then looked like a dry run for 1987.

With Coverdale’s blessing, Sykes de-bluesed Whitesnake. He packed out their rehearsal room with giant speaker stacks, drawing a line under their sunburst past and bringing them fully up to speed with the hard rock trends du jour. But the relationship between the two men was a turbulent one, a clash of two great big talents with two great big egos.

There was only ever going to be one winner in that battle. Sykes might have written and played on the songs that made up 1987, but by the time the album was released he was gone, along with studio bassist Neil Murray and drummer Aynsley Dunbar, replaced by a cast of made-for-MTV ringers drawn from Dio, Quiet Riot and Ozzy Osbourne’s band.

For all that, they managed to produce an album that oozed 80s class. The songs that make up 1987 are ingrained into the DNA of anyone who grew up during that glorious decade: the crackling moods of Still Of The Night (the greatest/most shameless Zeppelin knock-off known to man), the priapic thunder of Give Me All Your Love Tonight, the surprisingly sincere yearning of Is This Love?.

Long before he pilfered the gold from his own back catalogue with Whitesnake’s The Purple Album, Coverdale was giving flashy make-overs to two ’Snake classics: Here I Go Again and Crying In The Rain. The former is a textbook example of when hair metal got it right, the latter is the best song on the record.

This super-deluxe edition of 1987 comes stuffed with the requisite add-ons in the shape of four extra discs of material (three audio, one visual). Skip the inessential collection of remixes, the shabby in-concert recording from Tokyo which won’t give Live… In The Heart Of The City any sleepless nights and the collection of various promo videos featuring Coverdale’s thenmissus Tawny Kitaen writhing on the bonnets of assorted automobiles and head straight for Evolution ’87, a compendium of demos and early versions of the songs that make up 1987. This is where you’ll find the meat of 1987. Rather than merely upend the waste bin all over the floor, various versions of each track have been meticulously stitched together to make new versions, so you’re hearing them grow from rough demos to the (almost) finished article as they play.

It works brilliantly for two reasons. Firstly it’s a great way of charting the evolution of how a track is put together without having to sift through unnecessary detritus. Secondly, even the rawest incarnations of these tracks showcase the class of Coverdale’s voice – something the polish of the finished article occasionally hides. All the hairspray, teeth whitener and wives writhing on car bonnets can’t hide the fact that he’s one of the finest blues-rock singers Britain has ever produced.

At 10m sales and counting, 1987 remains Whitesnake’s commercial high point. Is it their greatest album? Maybe, maybe not – Ready An’ Willin’ and Love Hunter both run it close, but then neither had the sheer cultural impact this did. Not bad going for the bloke with glasses and frizzy hair from Deep Purple who wasn’t Ian Gillan.