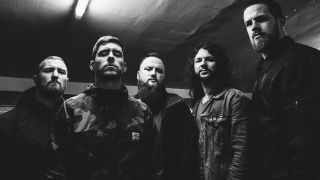 Whitechapel have released a stream of their brooding new track Third Depth.

It’s been lifted from the US outfit’s seventh album The Valley, which will launch on March 29 via Metal Blade Records. It’s the follow-up to 2016’s Mark Of The Blade.

The Valley is a reference to the Hardin Valley, near Knoxville, Tennessee, where Whitechapel vocalist Phil Bozeman grew up.

Guitarist Alex Wade explains: “Phil has been upfront in his lyrics in the past about hardships he endured in his life as a child, and I believe with this record we tried to paint a better picture of that.

“I feel our music is Phil's release from his past, being able to get it out and speak about it, and hopefully anyone who hears it that may have gone through similar experiences can find some release in it as well.”

Whitechapel will head out on tour across the US throughout April and May with Dying Fetus, Revocation, Fallujah, Spite, Uncured and Buried Above Ground.

They’ll then return to the UK in June for a set at the Download festival.

Whitechapel: The Valley
1. When A Demon Defiles A Witch
2. Forgiveness Is Weakness
3. Brimstone
4. Hickory Creek
5. Black Bear
6. We Are One
7. The Other Side
8. Third Depth
9. Lovelace
10. Doom Woods

Whitechapel: The Valley
Whitechapel return with their seventh album The Valley – the follow-up to their 2016 record Mark Of The Blade. it features the new single Third Depth.View Deal