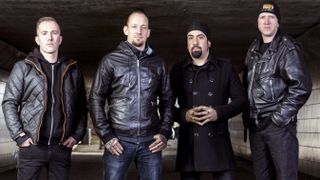 Volbeat have released a live video showcasing their track Seal The Deal.

The song features on the band’s sixth album Seal The Deal & Let’s Boogie, which launched in June. It’s the second Volbeat title to feature former Anthrax guitarist Rob Caggiano and the first without bassist Anders Kjolholm.

Speaking about the track, Caggiano previously told TeamRock: “We already had the album title before we wrote this song, and as is the case with all these songs they came together musically before we had any lyrics.

“But this song, to me, very much has the spirit of Motorhead in it. We were originally talking about covering a Motorhead song in tribute to Lemmy, but when Brandon from Teenage Bottlerocket passed away that kind of changed our plan.

“So we made the title track a kind of indirect tribute to Lemmy and Motorhead.”

Earlier this week, Volbeat confirmed they would tour Europe in August and September 2017, with frontman Michael Poulsen promising fans that it would be a “special” experience for fans.

Volbeat are currently on tour with Alter Bridge and Gojira.