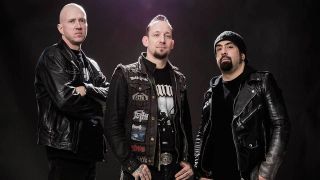 Having just exited Anthrax that same month, the Danish rockabillies wasted no time recruiting Caggiano as a full-time member, and he’s played lead guitar for them ever since.

As the band gear up to release their sixth studio album, the magnificently titled Seal The Deal And Let’s Boogie, Rob gives us his in-depth track by track guide to the record…

“This was the first song that got completed. It actually came together when we were out on the road during the last album cycle, and we were playing it on that tour to test it out and see how the fans reacted to it. They went nuts every time we went into that riff, which is a lot of fun to play. I think it’s a really strong song and it has that classic Volbeat energy to it.”

“One of the main differences between this new album and the last one is that the last album leaned heavily on the Western stuff, lyrically and musically, and with this record there’s none of that; there is no outlaw or Western vibe at all. We’re talking instead about voodoo and the occult, and Marie Laveau is one of those characters. She was the voodoo queen of New Orleans, and if you know anything about that then you’ll know the story is really interesting. I’ve always been really fascinated with the occult and black magic and all that stuff – not that I spend my spare time cutting up chickens – and Michael is also really intrigued by that stuff, so this song was a lot of fun to do.”

“This song features Johan Olsen [from Magtens Korridorer], who back in the day sung on a Volbeat song called The Garden’s Tale, which ended up being a big hit, especially in Denmark. It was kind of a special collaboration and Johan is an amazing singer, so it’s always been something that the band wanted to do again but they felt like if they did it too soon after then it would’ve felt a little contrived. Now so much time has passed, it felt like the time was right to try to capture that magic again. Musically speaking, this song was perfect for his voice; the vocal melody was screaming out for Johan and he totally took the song to another level. The middle section with the banjo is our friend Rod Sinclair, who’s this old Scottish guy who lives in Denmark. He actually played on the last record and we took him on tour last year, so it just made sense to have him guest on this record as well.”

The Gates Of Babylon

“This particular song goes down a road that Volbeat have never been down before, with the mood and the note choices. It’s got an almost oriental flavour to it that perfectly complements the lyrics and what the song is about – which is the story of Babylon. That’s also a very interesting story.”

“Personally, I’m really proud of the guitar stuff that’s happening on this song. There’s a guitar part that’s happening in the chorus that I think is really cool, and it really complements the vocal melody and takes the song to another level. That’s one of my favourite things to do as a guitar player, in addition to obviously playing solos and all that stuff; I like to come up with parts that take the song to a different place and spin the mood a little bit. That’s kind of what happened with this song. I’m very proud of the solo, too.”

“This song features Danko Jones and he’s a good friend of the band; we love what he does and he loves what Volbeat do. We took him on tour on the last album cycle and it was great. He’s such a cool dude, and he’s a huge music nerd like we are. He’s awesome. So we were working on this song Black Rose, and Michael was singing the verse part, and he was like, ‘Maybe Danko Jones could sing on this one. It sounds like something that he would do.’ And it totally does! We could almost hear it before it even happened. When we approached him about doing it he was totally psyched, and he completely nailed it.”

“This is a cover song. It’s originally by a band called Teenage Bottlerocket, who are also good friends of ours. We took them out on one of our European tours on the last album cycle and they’re a really awesome band. They very much have the spirit of the Ramones in their music and we love that vibe. Rebound is a song that we all love, too. The lyrics are great, and it’s really funny and really catchy. We’d talked about covering it in the past but for whatever reason we never got around to it. We got the news while we were in the studio that their drummer [Brandon Carlisle] had died, and that really hit us hard. So we learnt the song and recorded it as a tribute to those guys. That’s the story with this song.”

“We’ve talked about the whole voodoo thing already, and that theme runs throughout this record, but this song could also perhaps be related to that, depending on how you look at it. Mary Jane Kelly was Jack the Ripper’s last victim and her death was really brutal, but what’s interesting about this song is that Michael’s not singing about the murder or how she was killed; he’s singing about her as a person. For me, that’s a really interesting perspective and it makes you think about the whole subject in a really different way. It’s got a really cool melody, too.”

“This song features the Harlem Gospel Choir and it’s the first time the band has done anything like that, but it’s still a straight-up Volbeat song. It almost has a – dare I say it – Mumford & Sons kind of vibe to it. I was definitely a late bloomer on that band and I didn’t like them for a while – I think I even tweeted once about how all their songs sound like Dukes Of Hazard car chases. But now I actually think they’re amazing and I love everything that they do. Michael is really into them as well, so I think they might have rubbed off on us a little bit on this song.”

“We already had the album title before we wrote this song, and as is the case with all these songs they came together musically before we had any lyrics. But this song, to me, very much has the spirit of Motörhead in it. We were originally talking about covering a Motörhead song in tribute to Lemmy, but when Brandon from Teenage Bottlerocket passed away that kind of changed our plan. So we made the title track a kind of indirect tribute to Lemmy and Motörhead.”

“This song became popular with a band called the Georgia Satellites back in the day. They were a great rock ‘n’ roll band and this is a really great song. It was a last minute decision to cover it, and I’m glad that we did because it’s a genius song, really. From top to bottom there are only two chords in the whole song, but you’d never know that because it’s got such a great hook and a great melody. We had a lot of fun recording it and I think it came out really good.”

“This was the second song that we completed for the record, and it’s also one of the songs that I collaborated on. It’s an interesting tune. I think it’s a little bit different than what the band has done in the past, both musically and lyrically. I’m really proud of this one.”

“The last song on the album is my song; I came up with the tune, demoed it out and brought it into the rehearsal room. Then we tweaked it and changed it into what it is now. It’s cool to have that come to fruition, especially when you’re the new guy in the band. There are a lot of cool riffs in this song, and it’s definitely one of the heaviest ones on the record. It also features bagpipes, which is insane. And it was my idea to have that, which is even more insane because I’ve always said that I hate the bagpipes! But for whatever reason this part that I came up with really felt like a bagpipe part, and coincidentally one of Michael’s good friends was a bagpipe player so he came in and played on it. It sounds killer too, and it totally takes you off-guard because you’re not expecting it at all. I think the whole song came out great, from top to bottom.”

Volbeat’s new album Seal The Deal And Let’s Boogie is out June 3, via Spinefarm.

Volbeat: Inside the unlikely rise of The People's Band