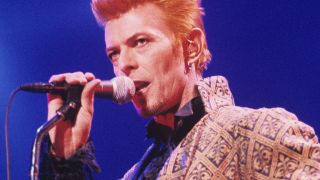 A video showcasing a 2019 remix of David Bowie’s classic track Space Oddity has been released to coincide with the 50th anniversary celebrations of Apollo 11’s mission to the moon.

The track has been remixed by longtime David Bowie producer Tony Visconti, with the video featuring footage of Bowie filmed during his 50th birthday concert at New York’s Madison Square Garden in 1997.

The promo also includes video shot and directed by choreographer Eduaord Lock which appeared on the backdrop of Bowie’s Sound And Vision tour in 1990.

The video made its premiere on Saturday at The Kennedy Center in Washington – the 50th anniversary of Neil Armstrong and Buzz Aldrin’s historic moon landing – which also came just days after Bowie released the single.

The Space Oddity remix featured on the double 7-inch single box set which was released earlier this month through Parlophone.

Along with the double 7-inch vinyl set, the package also includes a double-sided poster featuring an original Space Oddity press advert, and a Ray Stevenson shot of Bowie taken at the London Palladium on November 30, 1969.

In addition, the box set also features an info card and a print with an alternative shot taken by Jojanneke Claassen from the Space Oddity promo single cover session.