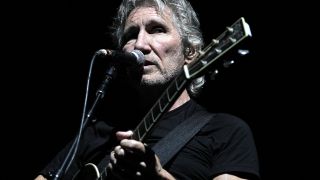 Last week, it was announced that Roger Waters’ Us + Them concert film would be screened at cinemas around the world on October 2 and 6.

The footage was captured at the former Pink Floyd man’s four-night stop at Amsterdam's Ziggo Dome on June 18, 19, 22 and 23 last year.

Today, the first official trailer has been revealed and can be watched below.

Waters says: “I’m so looking forward to the launch of the movie in October. Us + Them is not standard rock'n'roll fare. Some in the audience may 'yee ha!’ which is OK, but many will weep. That is what I hope for.

Co-director Sean Evans, who was also behind the 2014 concert film of Waters’ tour of The Wall, adds: “This is a great film – an amazing performance delivered with care, emotion and meaning.

"I didn't think it was possible, but I believe we've outdone The Wall.”

Tickets for the screening are now available through the film’s official website.