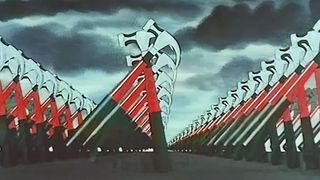 A video showcasing The Pink Floyd Exhibition: Their Mortal Remains has been released.

The retrospective on the band’s career will be held at London’s Victoria & Albert Museum between May 13 and October 1 and is the result of a collaboration between the museum and Michael Cohl’s Iconic Entertainment Studios.

It’s been organised to coincide with the 50th anniversary of Pink Floyd’s debut album The Piper At The Gates Of Dawn and is described as an “immersive, multi-sensory and theatrical journey” and will explore the music, visuals and staging used by the band throughout their career.

More than 350 items will be on display, including instruments, music technology, original designs, architectural drawings, handwritten lyrics and psychedelic prints and posters, some of which have been “long-held in storage facilities, studios and personal collections for over 40 years, before being re-discovered.”

A statement continues: “The entry point into The Pink Floyd Exhibition is a replica of the Bedford van Pink Floyd used as their touring vehicle in the mid-60s. From this first moment, the visitor is immersed in Pink Floyd’s world.

“Emerging from the vehicle, they will find themselves transported to Swinging London and the UFO club, the home of the capital’s psychedelic music scene, where Pink Floyd became the unofficial ‘house band’ during the early part of 1967.”

V&A director Martin Roth previously said: “Alongside creating extraordinary music, Pink Floyd have for over five decades been pioneers in uniting sound and vision, from their earliest 1960s performances with experimental light shows, through their spectacular stadium rock shows, to their consistently iconic album covers.

“The exhibition will locate them within the history of performance, design and musical production by presenting and complementing the material from Pink Floyd’s own archive with the V&A’s unrivalled collections in architecture, design, graphics and literature.”