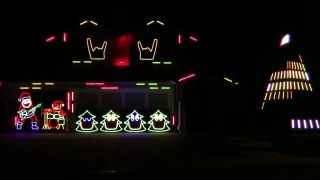 A man known for his elaborate metal-themed Christmas light displays has rigged up tributes to Slipknot and Disturbed for this holiday season.

Slayer Bob, as he’s known, originally lit his Southern California home with a light display set to Slayer’s classic track Raining Blood in 2009. In the following years he added further Slayer tributes, but this year has turned his attention to Slipknot and Disturbed.

His Slipknot effort is synced with their song Psychosocial from 2008 album All Hope Is Gone, while the Disturbed tribute features the track Stricken from 2005’s Ten Thousands Fists.

Check out both videos below.