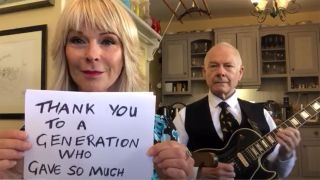 King Crimson guitarist Robert Fripp and his wife Toyah have released a video fo themselves performing a cover of David Bowie's Heroes (a song Crimson themselves released back in 2017) to celebrate VE Day.

Fripp's Uncle Bill, aka RAF Flight Sergeant Alfie Fripp, and Toyah's own relative Beric Wilcox had both been in the armed services, Alfie Fripp even helped in the planning of The Great Escape. Radio 2 even played Bowie's original version of Heroes in Fripp's honour when he died, which of course featured his nephew on guitar.

Both Fripp and Toyah have been entertaining fans with humorous videos of themselves during lockdown, including the pair dancing and even performing ballet. Most can be seen on Toyah's You Tube page.

You can watch their version of Heroes below. The backing track is taken from King Crimson;'s Live In Berlin 2014 release, with additional vocals from Toyah and also Jakko Jakszyk, whilst the guitar is Fripp’s Les Paul serial no. 9-1986; used on all King Crimson albums from 1969 to 1974 as well as the Heroes session in Berlin with David Bowie, Tony Visconti & Brian Eno at the Hansa Studios, July 1977.