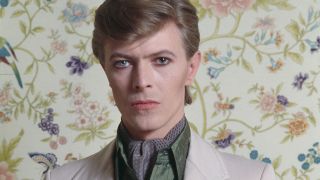 The story behind the song: Heroes by David Bowie

One afternoon in July 1977, David Bowie was looking out of the window of Hansa Studio in Berlin when he noticed a couple kissing near the Berlin Wall.

“I always said it was a couple of lovers by the Wall that prompted the idea for Heroes,” Bowie told Classic Rock in 2015. “Actually, it was [Bowie producer] Tony Visconti and his girlfriend. Tony was married at the time, so I couldn’t talk about it. But I can now say that the lovers were Tony and a German girl [Antonia Maass] that he’d met while we were in Berlin. I think possibly his marriage was in the last few months. And it was very touching because I could see that Tony was very much in love with this girl, and it was that relationship which sort of motivated the song.”

The basic track had already been started by Bowie and Brian Eno in the weeks before, with Visconti behind the mixing desk. Their working method during Bowie’s so-called ‘Berlin period’ was to build layered tracks that would later inspire lyric and melody, like making the frame before the picture. And using Eno’s ‘oblique strategies’ cards (aphorisms that encouraged lateral thinking), they would often give themselves creative dilemmas within that frame.

“Maybe I’d write out five or six chords,” Bowie told us, “then discipline myself to write something only with those five or six chords involved. So that particular dogma would dictate how the song is going to come out, rather than me and my sense of emotional self.”

On a broader level, living in Berlin itself was an oblique strategy for Bowie. As he said at the time: “I find that I have to put myself in those situations to produce any reasonably good writing. I’ve still got that same thing about when I get to a country… I have to put myself on a dangerous level, whether emotionally or mentally or physically, and it resolves in things like that: living in Berlin, leading what is quite a spartan life for a person of my means, and in forcing myself to live according to the restrictions of that city.”

Bowie threw his restricted chord progression out to the band, and they ran with it, building an eight-minute groove into a triumphant crescendo. The underlying riff of Heroes came from guitarist Carlos Alomar, with the hypnotic pulse provided by bassist George Murray and drummer Dennis Davis. “With such great musicians the notes were never in doubt,” Bowie later said. “We looked at ‘feel’ as being the priority.”

From the start, Eno described the music as “grand and heroic”, and said he had “that very word, ‘heroes’, in mind.” After the basic track was done, he overdubbed shuddering atmospherics by twiddling knobs on his EMS Synthi, a mini-synthesizer built into a briefcase.

The final touch was added by guitarist Robert Fripp. What the King Crimson leader later called “hairy rock’n’roll” was more a soaring series of aria-like feedback loops. Fripp marked with adhesive tape the spots on the studio floor where he could lock into certain singing tones. For a guitarist known for playing while seated, it’s interesting that one of his most enduring performances came from stepping and swaying.

The finished track sat for weeks. There have been rumours that Heroes was intended as an instrumental (hence Fripp’s wall-to-wall soloing). But Bowie says he was just waiting for the right lyrical spark, which eventually came from the lovers by the Wall.

Delivered in one of his greatest vocal performances, the us-against-the-world theme of his lyric was full of odd poetic touches, like the lines about the dolphins. As Bowie said, he often used a William Burroughs-inspired cut-up method of writing, taking random text from a book or magazine and reshuffling it. “I’ll use that idea to provoke a new set of images for me,” he explained, “or a new way of looking at a subject. I still find it incredibly useful as a writer’s tool. And I’m amazed these days at the amount of cut-up sites that are now on the internet. It’s quite phenomenal. There are at least ten, and two or three of them are excellent. I’ve used them too. I’ve put a bunch of pieces of text into the thing, then hit the ‘cut-up’ button and it slices it up for me.”

Heroes was released as a single in September 1977. It only reached No.24 in the UK, and didn’t chart at all in the US. But the emotional power of the song would continue to resonate, as it became one of Bowie’s theme songs, along with the likes of Space Oddity and Changes. Its most memorable moment would come 10 years later, when he performed it live at the Platz der Republik Festival, right across from the studio in Berlin where it was conceived.

“I’ll never forget that,” he recalled. “It was one of the most emotional performances I’ve ever done. I was in tears. They’d backed up the stage to the Wall itself so that it was acting as our backdrop. We kind of heard that a few of the East Berliners might actually get the chance to hear the thing, but we didn’t realise in what numbers they would. And there were thousands on the other side that had come close to the wall. So it was like a double concert, where the Wall was the division. And we would hear them cheering and singing along from the other side. God, even now I get choked up. It was breaking my heart. I’d never done anything like that in my life. And I guess I never will again.

“When we did Heroes it really felt anthemic, almost like a prayer,” Bowie continued. “I’ve never felt it like that again. However well we did it later, it was almost like walking through it compared to that night because it meant so much more. That’s the town where it was written, and that’s the particular situation that it was written about. It was just extraordinary.

“In 2002 we did it in Berlin again. This time, what was so fantastic – it was in the Max Schmeling Hall, which holds about ten to fifteen thousand – is that half the audience had been in East Berlin that time way before. So now I was face-to-face with the people I had been singing it to all those years ago. And we were all singing it together. Again, it was powerful. Things like that really give you a sense of what a song and performance can do.”