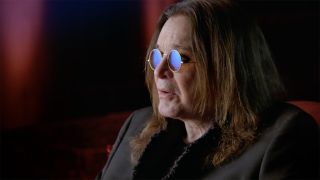 A trailer for the upcoming Ozzy Osbourne documentary titled Biography: The Nine Lives Of Ozzy has been released.

The film has been produced by A&E and directed by R. Greg Johnston, while Ozzy, his wife and manager Sharon and son Jack Osbourne are among the executive producers on the project.

It’ll premiere at Austin’s South By Southwest which runs from March 13-22.

In the clip, Ozzy watches video of his younger self and talks about his early days, while artists including Marilyn Manson, Post Malone and Rob Zombie, along with Sharon, Jack and producer Rick Rubin also feature.

Ozzy says: “I use the talent of making people feel somewhat entertained when I was goofing around to take onstage with my music. I suppose it’s the same kind of thing.”

Malone adds: “I think Ozzy’s music is timeless. It makes me cry and give me the chills – it’s just perfect.”

Other artists who will be interviewed in the 86-minute documentary include Ice-T and Korn’s Jonathan Davis.

The former Black Sabbath frontman will return to the stage in Atlanta on May 27, while his other live dates can be found here.