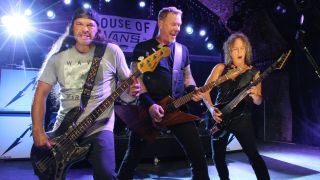 It features the band visiting cities including Berlin, Paris, Cologne, Copenhagen and London.

Footage shows Metallica preparing for TV appearances, signing CDs and vinyl – and sneaking up on fans and giving them a once-in-a-lifetime surprise.

The video also includes clips filmed during their Hardwired… To Self-Destruct launch show at London’s House Of Vans on November 18 – which also marked guitarist Kirk Hammett’s 54th birthday. He was plastered with foam pies during Seek And Destroy.

Earlier this week, Metallica made a surprise announcement that their show in Toronto would benefit a local food bank.

All proceeds from their gig at the city’s Opera House was donated to the Daily Bread organisation.

Members of the Metallica fan club paid $25 for entry while others were charged $100, and all attendees were asked to bring non-perishable food items to the show, to assist the charity’s work.

Hardwired… To Self-Destruct is Metallica’s sixth chart-topping album in a row. The band continue to add dates to their upcoming WorldWired tour, with the latest confirmed appearance being at Rock On The Range in Ohio next May.

Metallica hang out with the tribute band they almost sued