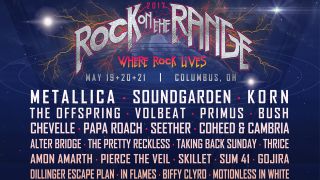 Metallica, Soundgarden, Korn and Volbeat are among the acts announced for Rock On The Range 2017.

The Columbus, Ohio, festival place on May 19,20 and 21 of next year at the MAPFRE Stadium – with Metallica, Soundgarden and Korn headlining the three nights.

Other bands announced for the event include Primus, Bush, Papa Roach, The Offspring, Alter Bridge, Chevelle and Seether.

Korn frontman Jonathan Davis says: “Rock On The Range is the pinnacle rock festival in America. I always feel that in the crowd and can’t wait for our headline set in May. We’re gonna come at you with everything we’ve got – expect a few surprises.”

Promoter Gary Spivack adds: “After our record breaking 10 Year Anniversary, it was high time to raise the bar and have the world’s best rock bands jump over it. We couldn’t be more honoured to have Metallica and Soundgarden at Rock On The Range!

“But why stop there? To have bands such as Korn, Volbeat, Primus, Papa Roach, The Offspring and so many more truly makes this year’s ROTR our best one yet.”

A selection of ticket options are available now at the official Rock On The Range website.

GALLERY: The Faces Of Rock On The Range 2015