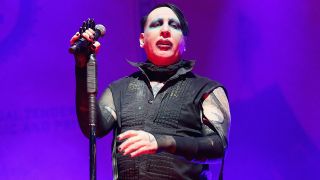 Marilyn Manson turned up at Travis Scott’s Astroworld Festival in Houston over the weekend where he performed a six-track mini-set.

The hip-hop heavy bill at the city’s NRG Park featured other artists including Pharrell Williams, Lil’ Flip, Pop Smoke and more - but it was Manson who got the crowd going.

He performed This Is The New Shit, Mobscene, The Dope Show, Antichrist Superstar and The Beautiful People – and even managed to fire up a mosh pip during his classic cover of the Eurythmics’ Sweet Dreams (Are Made Of This).

Check out fan-filmed footage below.

Last month, Manson released a video for his take on American folk song God’s Gonna Cut You Down, with his version first appearing on the soundtrack to the 2017 film 24 Hours To Live, which starred Ethan Hawke and Rutger Hauer.

In July this year, Manson spoke about his upcoming studio album which will see him hook up once again with Shooter Jennings, with whom he collaborated on a David Bowie cover in 2016.