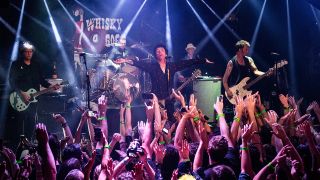 On Tuesday, Green Day, Weezer and Fall Out Boy announced they’d head out on the road together across the UK, Europe and North America in 2020 on The Hella Mega Tour.

Following the announcement – which was revealed in an Anchorman parody video – the three bands descended on the Whisky A Go Go for a secret show.

And with each band launching singles on Tuesday, Green Day took the opportunity to perform their new track Father Of All in front of the 500 fans who were packed into the legendary venue.

Fan-filmed footage of Green Day performing the song has now appeared online and can be watched below.

Green Day’s Billie Joe Armstrong revealed that the new track would be included on their upcoming studio album Father Of All Mothers****ers which is expected to be released in February – and he reported it’ll be the shortest album of their career.

He told Zane Lowe on Apple Music’s Beats 1: “Well, we recorded an album and it’s called Father Of All Mothers****ers – its song title is also that.

“It's got a unicorn on the cover. It's rainbow, bright. It's got a horn and it's got funny eyes. Yeah, we made a new record and we're really excited. It's only 26 minutes long, so it's the shortest record we've made since Dookie or Insomniac.”