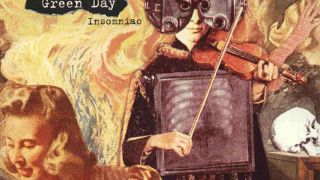 Some people will tell you that pop punk is all about sugar and niceness, pizza and songs about taking girls to prom and hanging with your bros. Yup, there’s plenty of that (and plenty of that stuff rules too) but Green Day’s Insomniac is so, so much more than that. Coming directly off the back of the Berkley trio taking the world by storm with Dookie (back when they were still a trio, before the addition of a fucking backing singer onstage and when there wasn’t nearly as many people onstage as there are in Slipknot), this is an album about disillusionment, the conflict between the person you having to go blow-for-blow against people who have never met you and their perception of you and fuelled by a Lemmy-sized meth habit and a fuck tonne of anger.

Although the money was rolling in by the truckload and the band had found themselves (somewhat unwillingly) as rock’s healing antidote to Kurt Cobain blasting his face off, all was not rosy in the Green Day camp in 1994 and into 1995.The Gilman Street punk rock scene that had shaped the members of Green Day’s childhood, given them a place they truly belonged as disillusioned teenagers and helped mould their identity as people had turned their back on them. As shopping malls became obsessed with punk (just as they had become with grunge a few years earlier), Green Day had become the hate figure for the genre going mainstream. Upon a late night return to the legendary 924 Gilman Street for a late night lock in with a friend, Billie Joe discovered graffiti on a bathroom wall that read ‘Billie Joe Must Die’. “That time period will always be a moment of confusion for me,” Armstrong confessed to VH1’s Behind The Music.

Lambasted as ‘sell outs’ (what else?) despite never changing musical direction or compromising their ‘fuck it all’ attitude, the disenchantment at being cast aside from their family was understandably all encompassing and there needed to be an outlet for that level of disillusionment. It was bottled up and gobbed out in point blank fashion on Insomniac. Add to that Billie picking up a mammoth speed addiction (Geek Stink Breath was pretty self explanatory) and you’ve got the recipe for an album full of bile and reckless abandon.

As ferocious a pop punk album as you’ll ever find, the guitars are visceral and uncompromising. Think we’ve gone soft? Fuck you, only 4 of 14 tracks clock in at longer than 2:30 and the playing on the album is as rancorous as anything from 1977. The melodies may be as catchy as a Top 40 ditty but Billie’s delivery is spat at you from the speakers, the frustration of unwillingly being heralded as rock’s new poster child at the age of 23 punctuated with every sneering, cynical lyric. “The world is a sick machine breeding a mass of shit” on Panic Song, “to heck with unity, separation will kill us all” on No Pride…not exactly the playground bollocks that the ignorant associate with the pop punk genre. Deep inside of Armstrong a rage burned that was perfectly captured on this, the most overlooked of all of Green Day’s albums.

Dookie might have the MTV favourites and American Idiot’s political schtick may have been enough to convince the pompous rock masses that Green Day were a band capable of more than just songs about weed and wanking but the evidence of an intellectual bite beyond their peers first reared it’s head on this punk rock classic. The angriest, fastest and most punk rock album in Green Day’s collection, it’s something of an album that time forgot in the modern era. It shouldn’t be. It’s the most vicious album in the history of pop punk and it’s still enough to make your lip curl and your face grimace today.

Modern Classic No. 1: Queens Of The Stone Age - Rated R