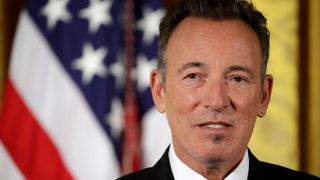 Bruce Springsteen at the White House to receive his Presidential Medal Of Freedom (Image credit: Getty)

Bruce Springsteen joined a string of stars including Tom Hanks, Robert De Niro and Michael Jordan for a Mannequin Challenge at the White House.

The Boss was at the White House to receive his Presidential Medal Of Freedom from outgoing US President Barack Obama. Also being honoured at the ceremony were Hollywood stars Hanks and De Niro, basketball icon Jordan, TV host Ellen DeGeneres and singer Diana Ross.

The Mannequin Challenge is a craze that has swept the internet in recent weeks. It sees people pretending to be mannequins and metal band Attila recently uploaded their tour bus effort.

Presenting Springsteen with his medal, Obama said: “I am the President, he is The Boss. And pushing 70, he is still laying down four-hour live sets.

“If you have not been at them, he is working! Fire-breathing rock‘n’roll. So I thought twice about giving him a medal named for freedom, because we hope he remains, in his words, a ‘prisoner of rock‘n’roll’ for years to come.”

Springsteen recently launched an audio companion to his autobiography Born To Run recently in the shape of Chapter And Verse.

Born To Run has been a huge success since its release, and has hit the top spot on The New York Times Best Sellers list. It’s also reached the no.1 spot in the UK, Ireland, Australia, Sweden, Austria and Sweden.