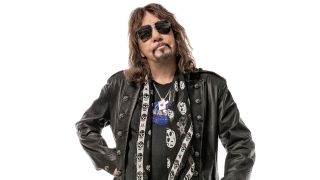 Ace Frehley has released a video for his new single Rockin’ With The Boys.

The song has been lifted from the former Kiss man’s upcoming studio album Spaceman, which will land this coming Friday (October 19) via Entertainment One.

It’ll be Ace’s first album of all-new material since 2014’s Space Invader and will also feature the track Bronx Boy which Ace revealed back in April this year.

Frehley plays bass on all but two tracks on the record, with his former Kiss bandmate Gene Simmons taking the reigns on Your Wish Is My Command and Without You I’m Nothing, which was also co-written by Simmons.

With Kiss recently announcing their plans to take their final bow on the End Of The Road tour, many fans are wondering if former Kiss members, including Ace, will be invited to take part.

Frehley recently reported that he was “hoping” to get the call, while Paul Stanley later said: “This will be a celebration of Kiss and not any individual lineup or any individual members.

He added: "That’s not something that’s been given a lot of thought at this point.”