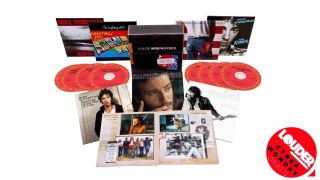 Black Friday has gone but Cyber Monday is coming and the sales won't stop until the world's collective pockets are empty.  While Walmart's star deal might be the Apple AirPods on sale for $129, the leading chainstore has a hell of a lot more deals  for music fans.

For Black Friday they had a $15 or less vinyl sale with everything from The Beatles to Black Flag – that's over, but there are still some bargains to be had, including big savings on this Bruce Springsteen boxset and many more.

Bruce Springsteen - Album Collection Vol 1: Was , now $159
A deluxe eight vinyl LP box set comprising re-mastered editions of the first seven albums recorded and released by Bruce Springsteen for Columbia Records between 1973 and 1984, all newly re-mastered, in recreations of their original packaging and accompanied by a 60 page book featuring rarely-seen photos, memorabilia and original press clippings from Springsteen's first decade as a recording artist.
View Deal

Guns N' Roses - Appetite For Destruction (vinyl): was , now $19
The biggest-selling debut album of all time and an essential part of any rock fan's record collection. View Deal

Nirvana - Nirvana (best of) vinyl: was , now $16.45
The first ever Nirvana 'best-of' album, in a suitably mournful sleeve and heavyweight vinyl.View Deal

Queen – A Night At The Opera (vinyl): was $22.97, now $15.95
Queen's classic 1975 album is most famous for being the home of Bohemian Rhapsody, but there are plenty more pleasures to discover, from the proggy vitriol of Death On Two Legs, to stately hit You're My Best Friend and Roger Taylor's I'm In Love With My Car, it's s rock landmark, reputedly the most expensive album ever made at the time, and you can hear every penny.View Deal

Foo Fighters - Foo Fighters: $15.33
The Foos' debut album shows Dave Grohl coming to terms with existence – and himself as a musician – in a post-Nirvana world. On its release, it reached number 23 in the Billboard chart, and marked the moment The Foo Fighters really arrived.View Deal

Nirvana - Nevermind: $22.97
Every home needs a copy of this classic. If yours doesn't, consider this a sign that it's your time to buy.View Deal

Queen - Queen: $17.28
Go back to where it all began with Queen's 1973 debut album, and enjoy a glorious hard rock marathon unlike anything else around at the time.View Deal

Weezer - Weezer: $17.92
This bona fide stone cold power pop classic captures Weezer at their absolute best – buoyant with just a hint of the nihilism and self-loathing that followed. A one-way ticket to bangertown. Buy it.View Deal

Bon Iver - For Emma Forever Ago: $17.66
This album has made a bunch of end of decade lists; if you're not sure why, now's your chance to listen and find out.
View Deal

Fleetwood Mac - Rumours: $22.97
There's classic albums, and then there's Rumours. On the simplest level, Rumours is a set of brilliant songs, beautifully played. That alone has made it the eighth-biggest-selling album of all time. View Deal

Santana - Greatest Hits: $18.97
We'll level with you: Santana has a lot of albums. Cut out the legwork of having to collect them all by just acquiring this collection of the best of what's on them. View Deal

Rob Zombie - Hellbilly Deluxe: Now $15.58| at Walmart
"13 Tales of Cadaverous Cavorting Inside the Spookshow International" reads Rob Zombie's debut solo album, and what a beast of a record. Superbeast, Dragula and Living Dead Girl (to name but a few) have become staples of any self-respecting goth/rock club DJ playlist.View Deal

System Of A Down - System of a Down: Now $17.39 | at Walmart
SOAD's eponymous debut album reached platinum status and features the riff-heavy Suite-Pee, single Sugar and Scream 3 anthem Spiders.
View Deal

Jimi Hendrix - Are You Experienced: Now $14.88 | Was $22.97 at Walmart
Hendrix's debut album, Are You Experienced, became an immediate classic - widely regarded as one of the greatest debut records in the history of rock music. How can you not have it in your collection?View Deal

Amazon.co.uk - new Black Friday deals every day
Adidas.co.uk - save up to 50%
AO.com - Black Friday deals on appliances are live now
Argos.co.uk - top savings on toys, TV and more for Christmas
Boots.com - save up to half price on selected items
Carphone Warhouse - early Black Friday phone deals
Converse - save 20% off Chuck 70s.
Currys.co.uk - Black Tag sale is now on
DNA Fit - up to 40% off DNA test kits
Dr Martens – Black Friday offers coming soon
EMP - for merch and rock'n'roll clothing. Save £20 on orders over £85
Etsy – original and collectible gift ideas
Firebox - crazy gift ideas and the world's smallest turntable
Google Store - a boatload of deals - including £70 off Pixel phones
Halfords - 20% off dash Cams, electric scooters and way more
I Want One Of Those.com - daft gifts and cool tech
John Lewis - Get great warranties with John Lewis' Black Friday offers
Lovehoney.co.uk - up to 50% off sex toys and more
Marshall - Black Friday sale coming soon
Mobiles.co.uk – cheapest mobile phone deals
Nike.co.uk - up to 30% off full price items
Nixon - home of the Metallica watch
PureScooters.co.uk - up to £500 off electric scooters
Simba Sleep save up to 40% on mattresses for Black Friday
Superdrug - top Black Friday deals at Superdrug
Very.co.uk - big savings on tech and more