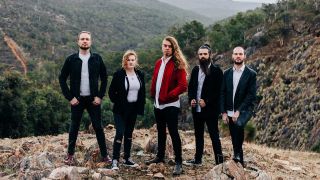 Australian prog faves Voyager have been added to the bill of this year's Space Rocks concert. They join the previously announced Amplifier and Anna Phoebe at the concert which closes the day-long festival of space exploration takes place at indigo at The O2 in London on Saturday September 21, hosted by renowned science broadcaster Dallas Campbell. Other confirmed guests include astronaut Tim Peake and Sky At Night presenter Chris Lintott.

"We think they’re the ideal addition to Space Rocks live bill," the organisers told Prog. "They join Amplifier, along with the headlining band – to be announced on Monday."

“Brightstar is about the power of rationality,” says Voyager frontman Danny Estrin of the band's recent single and video. “The importance of science as an art, of facts, of the demise of empirical evidence in favour of blind belief in idols who spit forth a torrent of nonsense and generally about not believing in something or someone because it’s shiny and bright and promises a warm blanket of comfort.”

An all-day event consisting of three sessions, Space Rocks will feature talks and presentations, as well as the concluding Space Rocks Live gig. It follows on from last year‘s successful event, which featured performances from Lonely Robot, Charlotte Hatherley and Arcane Roots.

Space Rocks won the Event Of The Year award at the 2018 Progressive Music Awards and was also nominated by the British Interplanetary Society for a Sir Arthur Clarke award – both hugely prestigious honours.