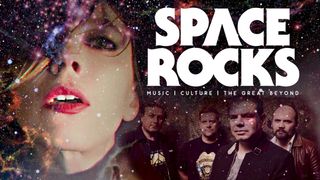 Says co-founder and Twin V director Alexander Milas, “Space Rocks came about because we all had a belief that space exploration is something that inspires imaginations, not just of scientists, but it pertains to some of the most profound literature, the greatest art and a lot of music. We feel there’s this inexorable link between space and everyone’s imagination, but we thought that what didn’t exist right now was a family-friendly event that brings all those things under one roof.”

Piloting in April, the one-dayer will be split into three sessions with static exhibits and a space lounge for space enthusiasts to enjoy. The sessions are:

Session Three (7.30pm - 10.30pm) – Space Rocks Live with Charlotte Hatherley and Lonely Robot
Live music from artists whose love of sci-fi and space travel has influenced their most recent albums.

The idea came about while Alexander Milas was Metal Hammer’s Editor-In-Chief.

He says, “It’s no secret that I’m a huge space fan and one of the things I was involved in [while at Metal Hammer] was the Golden Gods Awards. We had the Spirit Of Hammer Award for people who we felt were inspiring but who weren’t necessarily heavy metal musicians. In 2015, I invited Dr Matt Taylor to come down because he wasn’t just the project scientist involved in the Rosetta comet mission, but he’s also a huge music fan.

“It got me thinking, it got Matt thinking and other fantastic people at the ESA thinking, is there anything else we can do? The conversation was originally all about the Rosetta mission; they did an amazing thing, they landed a probe on a comet. We said, ‘It’s kind of sad that this robot is going to land on this comet then run out of juice and just float in space for the next billion years.’ We started talking about a going away party for it and maybe we’d get some bands to play, and here we are, a little while later, with this fantastic event.”