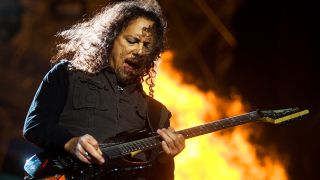 A small piece of history was made this past weekend as Metallica‘s Kirk Hammett got up on stage to jam with former band Exodus!

The set took place during Kirk’s own horror-themed festival, Fear FestEvil, at the Regency Ballroom in San Francisco, California, an event that also featured gruesome exhibitions and horror screenings amongst all the music mayhem.

Despite having not been a part of Exodus for three decades and having only appeared on a couple of early demos, Kirk is credited with being a huge influence in the band’s formative years and jumped up on stage with the thrash veterans to perform the band’s own Piranha (from landmark 1985 debut Bonded By Blood) and a cover of Blue Oyster Cult’s Godzilla.

Check out a video of the set below:

Exodus and Kirk Hammett at FearFestevil

Metallica headline Sonisphere in July. Tickets are on sale now from http://sonisphere.co.uk/, with a £50 deposit scheme now up and running.