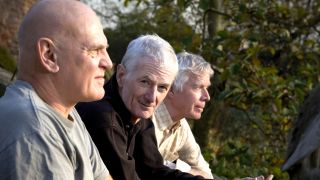 Peter Hammill, Hugh Banton and Guy Evans were captured live on their 2013 European tour, performing their epic A Plague of Lighthouse Keepers in full for the first time in decades – along with Hammill’s Flight as the centerpieces of the band’s live set.

Hammill says: “Flight had been in the repertoire since the last North American Tour. Lighthouse Keepers had only ever been played live once before, as far as we remember, back in the seventies.

“It was a pretty major commitment to say we’d be doing it before we’d actually rehearsed together. We were also doing it as a trio, whereas the original version was as a quartet with David Jackson. It took quite a bit of work to make it stageworthy!”

Merlin Atmos is available on CD, vinyl and as a limited edition 2CD digipak, which features a 70-minute disc of extras including Scorched Earth, Man-Erg, Meurglys III,The Songwriter’s Guild and Your Time Starts Now.

Van der Graaf Generator have teamed up with artist Vladislave Shabalin for an art venture entitled the Earlybird Project, which features 200 million-year-old petrified wood along with birdhouses fitted with speakers playing the band’s track Earlybird from 2012’s ALT.

The band are featured in the latest edition of Prog magazine, on sale now.