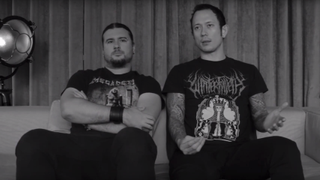 Trivium are unleashing Silence In The Snow tomorrow (2 October) on Roadrunner Records, and to get your ears excited Corey and Matt are giving us the rundown of the entire record – track by track.

In this first instalment of a three-part series, the Trivium guys talk about Emperor’s Ihsahn creating the album’s intro Snofall and how the title track has actually been around since 2007 when the band were touring Japan with Heaven & Hell. Matt Heafy also goes into detail about the story behind Blind Leading The Blind and its lyrical content about the apathy of mankind.

Silence In The Snow is available to pre-order now.