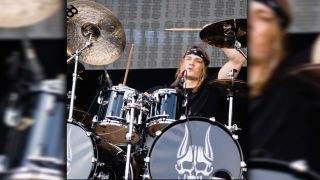 Trivium have officially revealed Paul Wandtke as their new drummer.

They say they split with drummer Mat Madiro for reasons of “creativity” and brought in Wandtke on the recommendation of Dream Theater’s Mike Mangini.

Madiro held the job since May of 2014 when he stepped up from his role in the band’s road crew to fill in for Nick Augusto.

Trivium say: “Mat stepped up for us at a dire moment where it was either leave a tour, or carry on. With Mat, we will forever be eternally grateful of everything he helped us out with. Mat’s time filling in for us was much appreciated.

“Creatively though, we felt at this time we needed to make a change. And every change, every difficult decision and every evolution that Trivium has either decided, or been forced to make has been for the necessary for us to continue on as a functioning band.

“The things that go on behind the scenes that directly involve the Trivium members aren’t always apparent from an outside fan’s perspective. With that said, our new drummer is Paul Wandtke from Chicago. With Paul, we took our careful time deciding exactly what had to happen and how.”

The band auditioned a string of potential replacements for Madiro before turning to Dream Theater guitarist John Petrucci for help.

Trivium add: “John brought Mike Mangini into the conversation and within minutes of describing our conundrum to Mike, he had a name – Paul Wandkte. Paul studied under Mike at Berklee, and obviously made an impression on a man we consider to be one of the greatest drummers on the planet.”

Wandke made his debut at Knotfest Mexico at the weekend. He says: “I was blown away when Trivium had contacted me. I have been looking for a place to call home all my life, a home of brothers with similar tastes in music, musicianship and goals.

“I’d like to thank Dream Theater’s Mike Mangini for getting us in contact. I couldn’t be happier, this is literally life changing. Never give up, be yourself and rock on.”

Trivium’s latest album Silence In The Snow was released in October. They recently announced a North American tour for 2016 in addition to their European summer dates.