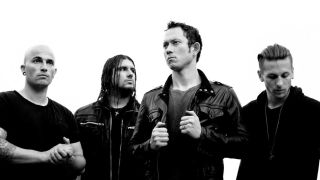 Trivium deliberately kept recording sessions for latest album Silence In The Snow under wraps as they wanted to be different to every other band.

Their seventh record in out on October 2 (Friday) via Roadrunner. And singer and guitarist Matt Heafy reports the reason behind the decision was that they wanted fans to hear the material once it was ready, and not before.

Heafy tells Allschools: “We were looking at how the other bands were promoting their records. It was basically the same thing: band guy, Instagram, sitting by the computer with a beer, saying, ‘Oh, I just finished drums.’

“We said, ‘How can we be different?’ Well, if everyone is talking about the record all the time, let’s not let anyone know we’re recording at all and just release it when it’s done.”

Heafy reveals they wanted to follow the model set out by the film industry, and adds: “When a movie is coming out, we’re not seeing the ‘making of’ now – we’re seeing trailers for the final product.

“We wanted to wait, release a video, and let that be the first thing versus us teasing stuff without music.”

The band have issued streams for the album’s title track, Blind and Until The World Goes Cold.

Trivium feature in the latest edition of Metal Hammer, out now in print, digital and via TeamRock+.

Why Trivium went back to their roots