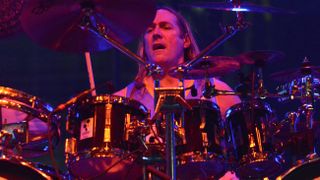 Tool gave one young fan an experience he will never forget when they plucked him out of the crowd and had him act as roadie for drummer Danny Carey.

Guitarist Adam Jones picked the youngster out of the audience at the band’s show at the Maverick Center in Salt Lake City, Utah. A video clip of the boy watching from behind Carey’s position on the stage can be viewed below.

The footage was captured by Carey’s girlfriend Rynne Stump.

Tool say: “During one of recent Tool shows, Adam plucked this lucky fellow out of the audience – with his parents’ consent, of course – and escorted him onto the stage behind Danny during the drum solo.

“Once there, he was given a drum stick - which he thought that he was supposed to hand to Danny - although what he really wanted to do was to keep it. I guess this means that he would rather be a drummer than a drum-tech when he gets old enough.”