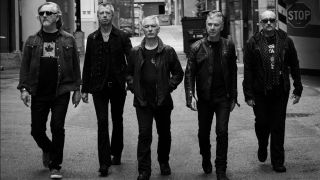 Thunder have revealed that they’ll head out on a UK arena tour next year.

The band will play a total of five shows, kicking off at Cardiff’s Motorpoint Arena on November 19 and wrapping up with a set at the First Direct Arena in Leeds on November 28.

It’ll be the first time the band have played a series of electric headline shows in the country since 2017, with Danny Bowes, Luke Morley, Ben Matthews, Chris Childs and Harry James joined by special guests Ugly Kid Joe.

Frontman Bowes says “After Please Remain Seated and The Greatest Hits releases this year, work on the next studio album is already under way. We’ll get it out before these five shows.

“I’m chuffed to report that it’s all new tunes, and it’s all rock. The setlist will be a mix of the new album and fan favourites, so it’s going to be a bit of a job working out which tunes we’ll play. I think I’ll leave it to Luke to sort that one out!”

While Ugly Kid Joe will be special guests for all five shows, Thunder have also revealed that they’ll choose a different opening act for each night, with details to be announced in due course.

General tickets will go on sale this coming Friday (November 22) from 10am GMT.

Thunder: The Greatest Hits
Thunder celebrate their 30th anniversary with the compilation The Greatest Hits. It includes covers of Gimme Shelter by the Rolling Stones and Your Time Is Gonna Come by Led Zeppelin.View Deal