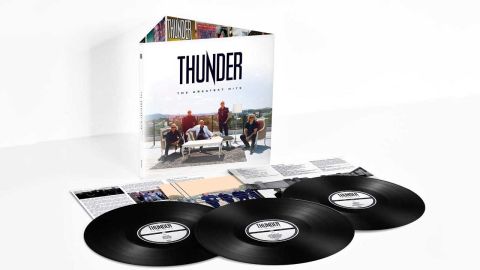 Although the true measure of Thunder will always be their live shows – full houses and beaming smiles a speciality, festival bills propped up, weddings and bar mitzvahs at a push – there’s cast-iron proof here that they’re no slouches in the studio, either.

The received wisdom is that they have never been able to recreate the magic of their first album. Which is bollocks, frankly. The quality here runs deep and long. Thunder could retire (again) now and put their feet up, certain in the knowledge that they have earned themselves a place in the pantheon of classic British rock, with songs of the heft and gravitas to get them mentioned in the same breath as Bad Company, Thin Lizzy and UFO.

Over the course of The Greatest Hits’ very strong 28-song line-up – plus a five-song Planet Rock live session from earlier this year with some formats – Thunder’s legacy is revealed as cleverly sponging up their heroes (The Who, Led Zeppelin, Humble Pie... even Alannah Myles on In Another Life!) before wringing out a markedly different cocktail.

There are two non-album tracks among the classics. The first is the charity single take on the Rolling Stones’ Gimme Shelter, from 1993, the second a newly recorded cover of Zeppelin’s Your Time Is Gonna Come.

It’s questionable whether we really needed another compilation, but the latter track alone reminds us both of Thunder’s musicality and the very special instrument that is Danny Bowes’s voice. Sinatra was well past his best at 59; Bowes sounds better than ever.

Buy the Thunder Bundle edition of the current issue of Classic Rock.