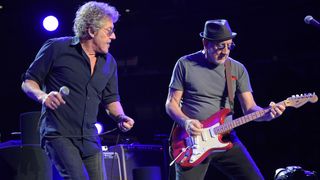 The Who have postponed their upcoming UK tour.

The five dates were due to take place in late August and early September – but they’ll now happen in April 2017.

The band say they’ve shifted the performances to coincide with two new dates at London’s Royal Albert Hall, which will see them play a new acoustic presentation of Tommy.

The London dates have been set up to benefit Teenage Cancer Trust, of which frontman Roger Daltrey is an honorary patron and will take place on March 30 and April 1, 2017.

The rescheduled UK dates, which were billed as a Greatest Hits package, will now feature “some lesser known Who songs and include a new focused presentation of Tommy drawn from the Royal Albert Hall concerts – including a brand new video programme specially produced for these shows.”

Tickets for the original concerts will be valid for the 2017 shows, with those seeking a refund asked to contact their point of purchase. Deadline for refunds is 5pm GMT on August 12.

The Who’s upcoming gigs in Germany, Austria and Italy will go ahead as planned.

The Who affected UK tour dates

The Who rescheduled UK tour dates

The Who 2017 Tommy And More London dates

The Who slam Quadrophenia sequel as 'blatant attempt to cash in'