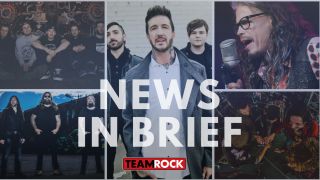 Here is TeamRock’s roundup of all the news snippets from around the world of rock and metal on July 27, 2016. Compiled by our news team at TeamRock HQ. For today’s regular, more in-depth news stories, click the ‘News’ tab in the menu above.

Of Mice & Men have added a date to their upcoming UK tour.

Austin Carlile and co are hitting the road in support of their fourth album Cold World, which is set for release on September 9. They play dates across the UK before heading to mainland Europe for a run of shows.

Steven Tyler’s solo album We’re All Somebody From Somewhere has entered Billboard’s Top Country Albums chart at no.1.

The Aerosmith frontman issued the record on July 15 and sold 17,000 copies in its first week, according to figures from Nielsen Music.

Speaking about his foray into country music, Tyler previously said: “I believe y’all are gonna listen to this stuff and you’re gonna agree with me that it fell from a star.

“I had nothing to do with this shit – it’s just Nashville. There’s something so magical about this town and me writing with all these people.”

Tyler is currently on tour across North America in support of the record.

Crown The Empire have released a video for their track Lucky Us.

The song features on the band’s Retrograde album, which launched earlier this month via Rise Records.

Vocalist Andy Leo said: “This album has been an accumulation of ideas, lessons and observations about who we are as a band and how we see the world.

“It’s taken 5 years for us to grow and really nail down a sound that doesn’t fit the status quo of what people are expecting from us. We’ve reinvented ourselves and we hope you enjoy the ride.”

In Flames have released a short clip of new music.

The clip is taken from their as-yet-untitled 12th album – the follow-up to 2014’s Siren Charms.

Earlier this month, In Flames issued a behind-the-scenes video showcasing DVD Sounds From The Heart Of Gothenburg, which will be released on September 23 via Nuclear Blast.

Guitarist Bjorn Gelotte said: “This DVD is for everyone who has been following our career. We have songs from the early years, the middle years and the new era. It has to be fun for us to play but also fun for the audience to watch and we try to get a good flow with nice dynamics and different songs.”

They’ll hit the road across the UK with Avenged Sevenfold and Disturbed in January for a run of eight dates.

They’ll play six dates across the country in support o their latest album Nothing I Write You Can Change What You’ve Been Through.

They launched their debut EP Look Alive in 2014 – and frontman Tobi Duncan last year told TeamRock about the variety of musical influences within the St Albans outfit.

He said: “It’s a big old mix. We all have really individual sounds. Oak is a massive Blink fan, then Dann loves his ska like Random Hand and Less Than Jake. I’m primarily the hardcore and metal fan, a lot of Turnstile, a lot of old Terror – the list is endless. All the different sounds mesh together in the creative process to create Trash Boat.”