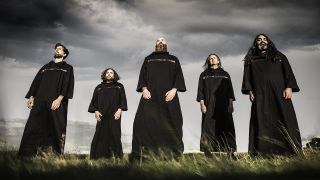 Darl folky proggers The Osiris Club have released a brand new live album, Blazing Worlds - Live At Roadburn & Twicefold Of Kind, through Bad Elephant Music. It's the band's first full release since 2018’s acclaimed The Wine-Dark Sea, the new record documents their stand-out performance at the Roadburn Festival in 2015, which saw The Osiris Club in their full theatrical, robed and masked glory.

"We’re really happy to be joining BEM”, says drummer Andrew Prestidge. “Releasing the recording of our 2015 performance at the Roadburn festival is a great way to launch the partnership. Although mostly thought of as a doom metal festival, Roadburn also programs a good number of prog and cinematic-flavoured acts, among other genre-adjacent picks. It’s been a lot of fun revisiting the recordings, and we hope everyone enjoys them!”

The band have also recorded a cover of Leaf Scrapings by Cardiac Arrest (later Cardiacs), which will released later as a charity fundraiser for Tim Smith's ongoing care. These recordings feature the current lineup of the band, and were laid down during the album sessions for The Green Chapel, The Osiris Club's forthcoming third studio album.