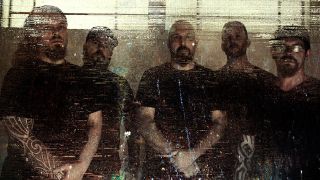 The King Is Blind are premiering their new video for Godfrost exclusively with Metal Hammer. The song is taken from the band’s upcoming album We Are The Parasite, We Are The Cancer, due for release on October 13 via Calva Records.

The video shows news footage of Martin Shkreli, storms and protests interspersed with the band performing.

Speaking to Metal Hammer, The King Is Blind guitarist says he worked with Kieran Wakeman from Divine Chaos Art to merge the styles of acclaimed documentarian Adam Curtis with “an abrasive performance piece.

“If you follow world news closely you are bombarded with an endless blizzard of human suffering,” he continues. “Although it has truly been painful to observe, it has made us so much more driven with our work as a band, our values as human beings, and defining what we stand for.”

Frontman Stephen Tovey tells Hammer that the song deals with the concept of envy, and coveting more material possessions regardless of their benefit, or “consuming for the sake of consuming.

The band’s upcoming album We Are The Parasite, We Are The Cancer is out October 13, via Calva Records.

The King Is Blind premiere video for Throne Of Skulls

The 10 best death metal albums, as chosen by Abhorrent Decimation