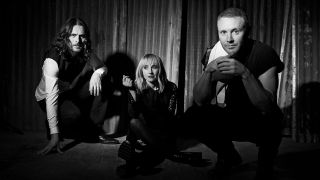 The Joy Formidable have released an animated video for their brand new track Dance Of The Lotus.

It’s the first new material from the Welsh trio since 2016 album Hitch, with the single the first taste of music from their as-yet-untiled fourth studio album.

Vocalist and guitarist Ritzy Bryan says: “We wanted to share this album track with the people who have supported us to give them a glimpse of what we’ve been working on, and this track is right at the heart of our new record.

“It’s magical and lonely, like a night-time walk in the desert when you’re trying to escape from yourself and the chaos you’ve created.”

Bryan adds: “We’ve definitely made a colourful, mystical collage with this record, partly because of our surroundings.

“Those multi-coloured sunsets and the primeval elements of nature in the south-west – it’s emboldened our imaginations in the songwriting and the production.”

The Joy Formidable have also revealed a handful of UK dates which will follow their appearance at the Robert Smith-curated Meltdown festival in London on June 22.