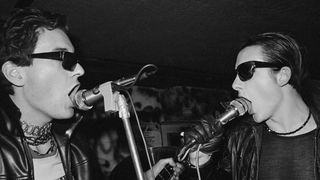 On February 18 1977, Stiff Records released the first British punk album. The Damned’s Damned Damned Damned combined the heads-down, no-nonsense approach of The Ramones with the demented, frantic aggression of The Stooges, and screeched to a fizzing climax in just under 30 minutes. Legendary BBC Radio 1 DJ John Peel celebrated the album’s arrival by playing five tracks on his show, and shortly after the band jetted off to New York to become the first punk band to embark on a US tour.

Four decades on, and The Damned’s legacy is obvious. They’ve influenced everyone from Bad Brains to Black Flag and Guns N’ Roses (who covered debut single New Rose on “The Spaghetti Incident?”), and BMG are re-releasing Damned Damned Damned as a special 40th anniversary edition. The new version features sleevenotes by punk journalist John Ingham, had written their first review as well as the first interview with The Sex Pistols (for Sounds magazine the previous year).

“It captured the essential part of the band,” says Vanian. “The essence, the excitement. Everything was there, and that’s why it still sounds good.”

“You have tho remember that at the time, the pre-eminent sound was Emmy Lou Harris and Little Feat and the soft disco pop that was on Top Of The Pops all the time,” says Sensible. “This [Damned Damned Damned] really got up people’s noses, and I know there’s been faster and louder bands since, but that record was a seismic moment.”

Damned Damned Damned is released on February 18. The Damned are on tour from later in the month (see dates below).

The Story Behind The Song: New Rose by The Damned