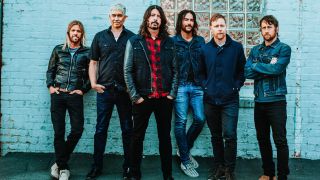 Dave Grohl says he and his Foo Fighters bandmates broke free of self-imposed restraints on new album Concrete And Gold.

The follow-up to 2014’s Sonic Highways is out tomorrow (September 15) and features guest appearances from Boyz II Men’s Shawn Stockman, Paul McCartney and Justin Timberlake. And while the band were in the studio, Grohl reports that they decided to change the way thy approached the songs.

He tells Mojo: “For the longest time we’ve been placing these restrictions round the band, these boundaries. Not only in the recording process but also in the songs.

“Thinking, ‘OK, we can’t go that far because we’ll never be able to reproduce that live.’ And this time, I thought, ‘Fuck it. Just fuck it.

“I said to guitarist Pat Smear and drummer Taylor Hawkins at one point, as we had stacked 32 vocals together, ‘How the fuck are we gonna do this live?’ And Pat said, ‘Just do what Queen did – do the live version.’”

Grohl also reveals that AC/DC’s 1980 concert movie Let There Be Rock had a profound impact on him when he was growing up.

He says: “The energy that the Foo Fighters try to give off is rooted in the night I saw that movie. Live performance should be all about that scene where Angus Young is offstage sucking an oxygen tank, soaking wet, basically in his underwear.”

The band will open The Foo Fighters Arms pop-up pub in London tonight. The Foos have lined up a range of entertainment throughout the course of the next week at the venue, including the chance to grab exclusive merchandise.