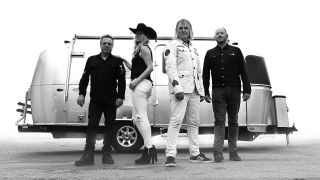 The Alarm have announced their return by releasing a video for their new single and announcing details of their upcoming studio album.

The album is titled ∑ (Sigma) and it’ll launch on June 28 – a year and a day after the release of their last record Equals.

And to mark the announcement, Mike Peters and co have shared the first single from the record in the shape of Blood Red Viral Black, which features The Cult guitarist Billy Duffy.

Peters says: “All the songs had a similar emotional core although there are also fundamental differences, so I divided the songs into categories: Inwards, red, blood, outwards, black and viral.

“Road-testing the new songs live, helped us decide to release the music in two stages. First as Equals with the knowledge that a sequel would come in the form of Sigma a year later.”

Speaking about Duffy’s contribution on the lead single, Peters adds: “Having Billy Duffy play guitar with The Alarm has become part of our DNA. It’s a relationship that goes back to the start of this new century, when the beginnings of new eras for both The Alarm and The Cult were being formed.

“Blood Red Viral Black defines our relationship as friends and opposites, human beings united through the colour of sound.”

In addition, it’s also been revealed that The Alarm will play a one-off show at Cardiff’s Great Hall on June 29 – and they’ve also lined up three UK shows for March next year.

The Alarm will play at The Garage in Glasgow on the 21st, Birmingham’s Institute on the 27th and London’s Electric Ballroom on the 28th.

Tickets will go on sale from April 28.

The Alarm: Sigma
The Alarm will release their new album Sigma on June 28 – a year and a day after the launch of Equals. Sigma includes the lead single Blood Red Viral Black which features The Cult's Billy Duffy.View Deal