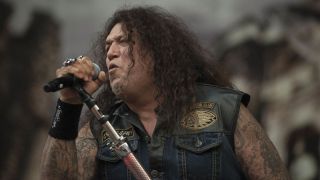 The run of shows are scheduled to begin with an appearance at Hellfest, France, on June 17.

Earlier this month, frontman Chuck Billy hinted that sessions for their 11th album had begun and were inspired by “religion and aliens.”

He added: “Right now, I think The Brotherhood Of The Snake is what we’re going to title the album – and it’s the first single. I think it’s probably going to be a freebie that we’ll just give people to check out.”

Guitarist and founding member Eric Peterson previously revealed the band chose to delay recording the album until they finished their “killer” tour with Slayer and Carcass. Those dates continue tonight (February 19) at Chicago’s Riviera Theatre.