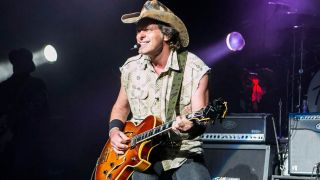 Ted Nugent has weighed in on the killing of Cecil the lion, calling the story “a lie.”

US dentist Walter Palmer caused outrage when he shot and killed Zimbabwe’s most famous animal in what he believed was a legal hunt.

But Cecil was being monitored as part of an Oxford University study into lion conservation and was a major tourist attraction at the Hwange National Park – Zimbabwe’s largest game reserve.

Nugent, who is known for his pro-hunting stance, was drawn into the conversation on Facebook when he was asked for his thoughts on the incident.

He says: “The whole story is a lie. It was a wild lion from a ‘park’ where hunting is legal and essential beyond the park borders.

“All animals reproduce every year and would run out of room/food to live without hunting. I will write a full piece on this joke ASAP. God are people stupid.”

Palmer and his guides reportedly lured Cecil from the park before Palmer shot the beast with a bow and arrow. They then caught up with the injured lion 40 hours later where it was shot with a rifle and beheaded.

Palmer said he regretted his actions but maintains he had no idea the lion was a local favourite.