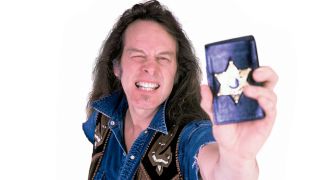 Where do you stand on the subject of crime and punishment?

I’m against crime and I’m for punishment [laughs]. But the justice system in the United States of America is an embarrassment. If you name it properly, it’s a legal system and not a justice system.

We have engineered recidivism in America. I’ll give an example – and it breaks my heart to say it. Everyone from psychologists to criminologists knows that child molestation is a one-hundred‑per-cent recidivistic crime, and yet the response – the American clusterfuck – is to put these people in registered homes in our neighbourhoods. That’s so they can catch them when they do it again – which they will. To let out known evil is evil itself.

When your dog brings you your slippers and the newspaper, you can give him a biscuit and a hug. When he’s got rabies, you put a bullet between his eyes. The court system in America is sinfully soft. It’s tragic.

Have you ever been the victim of crime?

Yes, but I wasn’t there to fix it. I’ve had guitars stolen and my home broken into. And one guy tried to assault me, but I was able to neutralise that.

A guy took a swing at me and I arrested him. I got him in what used to be called a full nelson – now it’s called a full Nugent. I introduced his face to Mr Wall. I called my friends in blue and they put him in a cage for a few days.

You’ve also been busted twice in the past five years for illegal hunting practices in California and Alaska.

All the charges were false. I was a victim of our insane court system.

So why plead no contest to one charge and guilty to the other?

Because it would’ve cost me more than my life’s savings to fight it.

Do you consider those charges an abuse of your human rights?

Certainly. It was an abuse of power by inept, unqualified punks in black robes. We have a Supreme Court in America, and four of the nine judges, the Supreme Justices, voted against the right to keep and bear arms. They also claimed that Americans do not have an intrinsic right to self-defence. That’s just bizarre.

Is it the right of all Americans to bear arms, or would you make some exceptions?

Of course there are exceptions – mentally deranged people. With every mass shooting in America, every one of the shooters had a blatant history of dangerous, life-threatening, violent behaviour. Those people should not have guns – and nor, of course, should felons. But I don’t think hardware access is the problem. It’s this system we have, of parole and early release, where the most violent offenders are freed.

You argued this point in a TV debate with Piers Morgan on CNN. His logic was simple: the more guns in America, the more access a lunatic has to them.

That assumption could make sense. Here’s another assumption: where you have the most water, you have the most drownings. But that’s not true. You have fewer drownings where people live on water, by lakes or oceans. So once you get past the assumption, there are the facts. In those jurisdictions in America where there’s the highest per-capita firearms ownership, not only do you have a dramatic reduction in violent crime, in some instances personal assault crimes don’t just go down, they go away. More guns equals less crime. More gun control – Chicago – equals more crime. As I said to Piers Morgan, I don’t know why there is such resistance to what are universally known statistics.

The death penalty – are you for it or against it?

I’m for the death penalty at the scene of the crime. Call me weird, but you have a choice. One choice is to let the rapist rape the woman. My choice would be to have the woman shoot the rapist and not get raped. If you’re for gun control, you’re on the side of the rapist.

That’s a tricky one.

No it’s not. I just nailed it. It’s a tricky one if you’re a brainwashed sheep. Baaaaaa!

_Do you still consider the police to be “friends”? _

It goes deeper than that. Freedom and security are not free, and I have a profound reverence for those that put their lives on the line every day to preserve that freedom.

Have you ever broken any laws and got away with it?

Not apart from traffic offences. I was raised with a healthy fear of authority. If I’d broken a house rule, my dad would have whupped me. That’s called parenting one-on-one. I think quality of life begins with law and order.

So what happened when your drummer Mick Brown was arrested in 2012 after a gig in Maine, when he allegedly stole a golf cart while drunk and led police in what was described as a “low-speed chase”? Did you punish him?

Hell no! Old Mick is a little edgier in the law and order department than I am, but he’s a solid guy. He had a couple of extra lagers after the last gig of the tour. He saw a golf cart and a couple of floozies. What else could he have done but go for a little joyride? On a scale of one to ten for danger, I don’t think that even qualifies as a one.