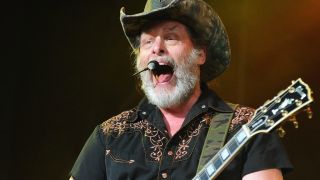 Ted Nugent reveals to Classic Rock that his new album Shutup&jam! was recorded while he was in agony following double-knee replacement surgery. But the veteran rock legend, now 65, claims that the power of the music healed him – and that this new album, his first in seven years, is “a monster classic all-American rhythm and blues rock’n’roll masterpiece”.

Speaking from his home in Michigan, Nugent gives us the lowdown on the album, which is released on July 4, and features a special guest appearance from Sammy Hagar, plus a song that ‘Uncle Ted’ describes as one of the most “beautiful” he has ever written – I Love My BBQ.

How hard was it for you to make this album while recovering from your surgery?

It was a tough time for me. I was crippled up – I just got out of a damn wheelchair. We cut the record right down the road from a house I have in China Spring, Texas, and we were recording during some of the most painful times. But the music took away some of this chronic pain I was having. It was a cleansing period – a medicinal sonic bombardment.

So, despite the pain, you enjoyed making the record?

And even when you’re in a wheelchair, you can still kick ass?

Listen – right now there are twelve year-old kids in a garage with their first guitar and amp, and they wish they could have this much piss and vinegar. This record has so much energy, it’s so uppity – I can’t rave enough about it. I would pity any human that thinks they could live without it. The critics will furrow their brows and snigger, because of Uncle Ted’s dangerous enthusiasm, but yeah, my cup runneth over.

Who is playing on the album?

Mick Brown played on two songs, drumming up a storm. I fulfilled one of the my all-time musical dreams by getting the great Johnny Badanjek – the original Mitch Ryder drummer – to perform on two monster tracks. I got Greg Smith on bass and Derek St. Holmes on guitar and vocals, and all these guys put so much fire in every song. The unbridled enthusiasm that the guys deliver in the studio – you really have to witness it to begin to understand it.

And you’re singing a duet with Sammy Hagar on She’s Gone.

He and I have known each other and jammed and rocked together forever. We’ve always shouted and yelled about performing a jam on each other’s record at some point, so this time I demanded it. He delivered everything that Sammy Hagar is capable of. He is so Sammy. You can’t ‘de-Sammy’ the guy.

Had you always planned on doing a duet?

Well, it’s kind of cute how that went down. I’m very proud and defensive of all my songs. I’m saying what I want to say, and that’s sacred personal stuff to me. When I sent She’s Gone to Sammy, I didn’t have to give him any directions. All I said was: ‘Just Sammy it up! Show me what you got, boy!’ I sent him the guide track with my rough vocal, and I wanted him to sing the whole song, but he called me back and said, ‘I’m not singing this! I can’t beat your vocal – it’s a son of a bitch! You got to sing this song.’ I said, ‘I sang it like that cos I was thinking of you.’ But in the end I took his advice. It ended up a duet, where we’re answering each other and we crank out some of the chorus abuse together. It’s really cool. He sang his balls off on it.

Who produced the album?

Michael Lutz and I produced it. Michael was the driving force in Brownsville Station. He’s a gung-ho music guy – he lives this stuff. He and I did the Spirit Of The Wild album years ago, and it had wonderful tones, so I brought him back. But we don’t really produce – we just get out of the way. Michael is there to make sure that what my amp and speakers and guitars are delivering in the room ends up on tape. My whole life is about guitar tone, and Michael is a guy who makes sure that what we’re doing in the room ends up on tape.

Yeah, the story of my life.

Not the ‘shut up’ part, though…

Here’s the funny thing. This is why I do interviews with you fucking goofballs – especially you Limeys, who want to be me so bad you shit yourselves. You ask me questions about the most passionate things in my life – all the things I live and breathe and cherish and pivot upon – and you condemn me for being verbose. You gotta be fucking kidding me! It’s a fucking interview! So no, I don’t shut up. I’m not gonna shut up. I got this freedom of speech thing going on. I’m addicted to it.

So the title track is about this freedom of expression?

I’ve been here before with Great White Buffalo, which was extremely political and conservation-minded and independent and defiant. And with Shutup&jam! I just wanted to let rip. The lyrics go like this: ‘Everybody’s looking for a free for all, enough of this political stuff/Right, left, good and bad, it all gets boring and old/Everybody needs rock’n’roll/So shut up and jam/you know who I am/You know where I stand/ Shut up and jam.’ That song is a motherfucker.

Presumably, you’d apply that colourful description to the rest of the songs?

How does that one go?

‘I love my barbecue/It’s what Americans do/Pull up a chair, I’ll get a beer for you/The tofu just might kill you, tossed salad make you weak/We like to kill ’em and grill ’em/It’s protein that we seek.’

I’m a beautiful man. I have beautiful thoughts. My barbecue is to die for – and many things do. I Love My BBQ – it’s a fucking love song. So yeah, it is beautiful!