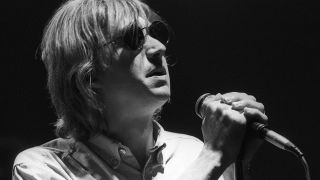 A tribute show in honour of late Talk Talk vocalist Mark Hollis is to be held in London next month.

Hollis died at the age of 64 in February this year after a short illness, with A Celebration Of Talk Talk And Mark Hollis set to take place at the Southbank Centre’s Royal Festival Hall on November 24.

The evening will see artists from across musical genres including Jane Weaver, Alexis Taylor, Joan As Police Woman, Andy Bell, Tim Burgess and Turin Brakes join founding Talk Talk member Simon Brenner and the Spirit Of Talk Talk band to play tracks from the band’s back catalogue, including songs from 1988’s Spirit of Eden and 1991’s groundbreaking album Laughing Stock.

Tom Baker from Eat Your Own Ears and Bengi Ünsal, head of contemporary music at the Southbank Centre, say in a joint statement: “This celebration of Talk Talk and Mark Hollis is going to be a very special, one-off evening of magical music.

“It’s fantastic to have such an array of brilliant guests from Hot Chip’s Alexis Taylor, Jane Weaver, and Ride’s Mark Gardener and Andy Bell, to Joan As Police Woman alongside some of the fabulous musicians that have played with Mark Hollis on the Talk Talk albums and on tour.

“It’s going to be an unforgettable and truly magnificent event.”

The book The Spirit Of Talk Talk compiled by Toby Benjamin will be available to purchase on the night.

Meanwhile, Hollis’ self-titled 1998 solo album will be re-issued on heavyweight vinyl through UMC/Polydor on November 1. The record was remastered at Abbey Road Studios.

A Celebration Of Talk Talk And Mark Hollis lineup