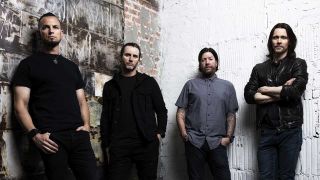 As Alter Bridge prepare to release their new studio album Walk The Sky on October 18, the band have released another track from the follow-up to 2016's The Last Hero.

In The Deep is out today and to accompany it, Alter Bridge have shared an underwater-themed lyric video which can be seen below.

The group previously launched the tracks Wouldn’t You Rather, Pay No Mind and Take The Crown from the record, which will be released through Napalm Records.

A statement on In The Deep reads: “The song opens with a driving intro that breaks down to an inspirational verse and powerful chorus that has become a calling card for Myles Kennedy, Mark Tremonti, Brian Marshall and Scott Phillips.”

Following the release of Walk The Sky, Alter Bridge will head out on a UK and European tour.

They’ll be joined in the UK by Shinedown and Sevendust, while Shinedown and Raven Age will hook up with Alter Bridge for the shows across mainland Europe.

Alter Bridge: Walk The Sky
Alter Bridge will release their new studio album Walk The Sky in October. It'll features the lead singles Wouldn't You Rather, Pay No Mind, Take The Crown and In The Deep.View Deal