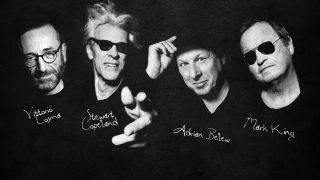 Gizmodrome have announced that they will release their self-titled debut album later this year.

The all-star band consists of Stewart Copeland, Adrian Belew, Mark King and Vittorio Cosma, with the record scheduled for a September 15 launch via earMUSIC.

One of the album tracks is called Strange Things Happen – and Copeland says the title is appropriate to the way the project came together.

He explains: “Vittorio and I have been playing together for years in Italy, but it got serious when Adrian and Mark joined us for 15 days of wild creativity in a Milan recording studio.

“If you put the right guys together in a rehearsal room, ‘strange things’ definitely happen!”

King recalls: “Stewart texted me and asked if I fancied joining him and some of his friends in a studio in Milan – and next thing, I’m banging out basslines to his ferocious beats with Mr Adrian Belew bouncing sounds off the walls that I never heard before. And Vittorio, who somehow always pulls it all together. That is Gizmodrome!”

“Gizmodrome totally surprised me,” Adrian Belew says. “I went into a studio in Italy not knowing what to expect and by the end of day one of recording I knew two things – the musical chemistry was incredibly exciting and we were having incredible fun!”

Further album details will be revealed in due course but a work in progress version of the track Amaka Pipa can be heard below.