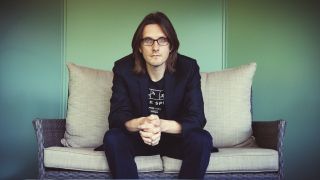 Steven Wilson says his material won’t appear on music streaming services as the model is “flawed.”

He’s just released his limited-edition compilation album Transience on vinyl only and says he’s comfortable going down that route – even if it means his work doesn’t reach a wider audience.

He says: “People are always asking me why I’m not on Spotify, and it’s really difficult as I know I’m missing out on potential discovery.

“I just think the model is flawed. My solution is to go in the other direction and try to make the physical piece as appealing and as attractive as possible: doing special editions, making nice vinyl, and making the shows as visually spectacular as they can be.”

Earlier this year, Wilson insisted the album format would survive as sales of his latest album Hand. Cannot. Erase. proved people wanted to immerse themselves in conceptual pieces of music rather than individual tracks.

He said: “What we’re seeing right now is a world of streaming, where there’s a juke-box mentality and you follow the links from one song to another.

“At the same time there are a lot of people who have revelled against that and they’re getting back into the art of album listening.”

Wilson is currently on tour across Europe and will play two nights at London’s Royal Albert Hall on September 28 and 29. A special edition red-cover book entitled Index celebrating the artwork surrounding his music will be available at the London shows.

He’ll return to the UK for five dates in January.